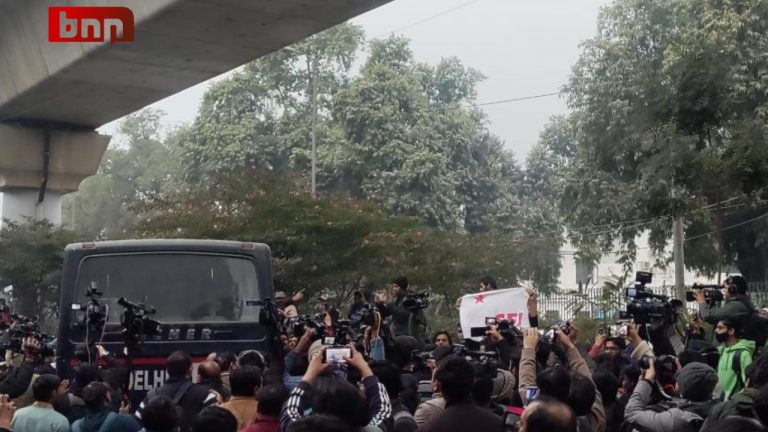 After the Students Federation of India (SFI) announced they will screen a documentary on Narendra Modi. Few students protested outside of the campus of Jamia Millia Islamia university.

The Delhi Police detained at least a dozen non-Jamia Millia Islamia students. Some of the prisoners were shouting slogans outside the campus when the cops arrested them. A day before, Jawaharlal Nehru University was roiled by the same documentary.

At 8:30 pm on Tuesday, JNU lost power, 30 minutes before the showing. Students who watched the film on their phones and laptops afterward said they were stoned.

“A screening for a BBC documentary was to be organized by a group of Jamia students inside the university today, which was not approved by the University administration,” DCP (Southeast) Esha Pandey stated.

The University administration told the police that certain students were causing a nuisance on the streets, thus 13 students were held about 4 pm to maintain order.

Local and paramilitary police were deployed to Jamia University on Wednesday by the Delhi Police. Police guarded most gates with anti-riot gear.

“Nothing happened inside our university, an effort was made but it was absolutely foiled,” said Jamia Millia Islamia Vice-Chancellor Najma Akhtar on Thursday. Everything happened on the streets. It was overblown. We took appropriate precautions.”

traffic accident on the highway of Jalalabad and Kabul left 15 dead and injured.