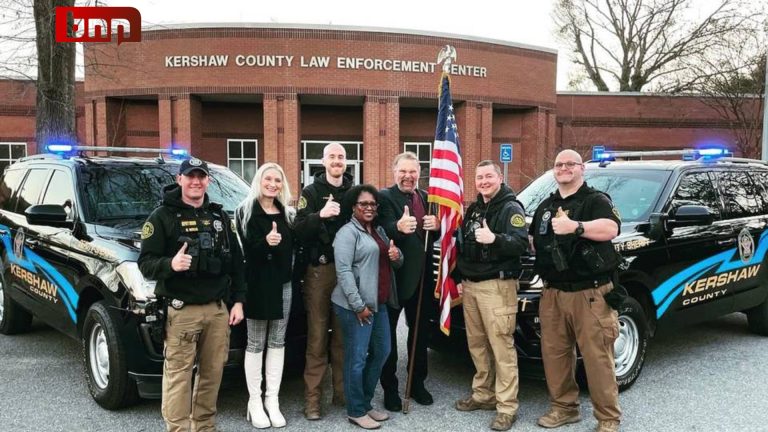 When a man on the run from someone he thought was going to kill him broke into the Midlands, South Carolina home of a legendary professional #wrestler, “Hacksaw” Jim Duggan.

Duggan, 68, was so pleased with how the incident was handled that he and his wife, Debra Haynes Duggan, paid a visit to the #KershawCounty sheriff’s headquarters to meet with the dispatcher and deputies the couple interacted with after calling 911 on Dec. 8, 2022.

“Debra and I (met) with the dispatcher and sheriff’s deputies that helped us with the home intruder last month!!” Duggan said in a social media post, where he signed off with his signature exclamation. “Thank You to the great people at the Kershaw County, SC Law Enforcement Center!! HOOOOOOOO!”

The man broke into the Duggans home, and it was ultimately determined he was running from someone he thought was trying to kill him, the sheriff’s office said.

“He entered ‘Hacksaw’s’ residence to evade the person chasing him,” the sheriff’s office said. “Yes, he jumped out the frying pan into the fire.” The man climbed the Duggans fence, ran through their yard and was pounding on the couple’s glass front door, according to “Hacksaw.”

The iconic pro wrestler safely detained the man as Debra called 911, according to the sheriff’s office. “Hacksaw” said he took down the “hysterically frightened” man and held him at gunpoint with a .44 caliber pistol while the sheriff’s office was called.

Deputies quickly responded to the Duggans’ home and the incident was resolved, the sheriff’s office said. Despite his intimidating reputation.

“Jim and Debra are great people and always supportive of law enforcement,” Sheriff Lee Boan said after the visit. “We were more than happy to give them some support during this unforgettable incident. We are proud to call them our fellow Kershaw County citizens.”

“Hacksaw” said the incident was “terrifying.” even though he was known as a tough guy who carried a “2×4” to the ring when he wrestled. “Hacksaw” was inducted into the WWE’s Hall of Fame as a member of the class of 2011.